Hi everyone! First, my apologies. I know I've been a deadbeat blogger. I forgot to post two weeks ago, and I'm a day late this week. (Better late than never, right?) My head is full to capacity just trying to deal with my Final Portfolio class. The workload is crazy (and just getting crazier) as we roll towards the end of the semester mid-May. In any case, that still means no illustrating for me for a while. I figure I'll keep posting what I am working on right now.
Right now, it's a "calls for entries" packet. The idea is for people to submit ideas about designing affordable housing for urban areas. We have to design a poster (front and back) that will fold into a self mailer, an invitation, and an awards certificate. I'm still plugging away here, but I figured I'd show you what the front of my poster looks like so far. (I was inspired by Edward Hopper-esque light). I'll have to post the final project once it's done. In the meantime, here's a little taste of what's been keeping me trapped in my studio slaving away over Adobe Creative Suite: 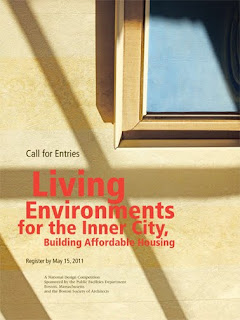 Wishing you all a creative week! -Nicole
Posted by Nicole Huot at 8:26 PM 5 comments:

I haven't done a postcard mailing in a really long time.  I'm due to send one again.  Can't let those Art Directors forget who I am.  Postcards are such an easy way of giving them a little reminder!

I'm still at the sketch phase right now.  My plan is to have the dog on the front of the card, and on the back side: the girl. 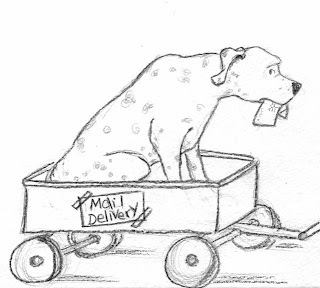 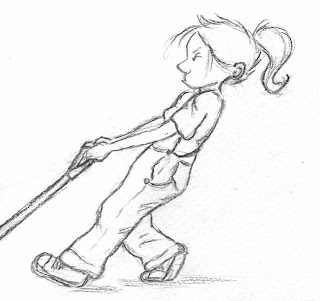 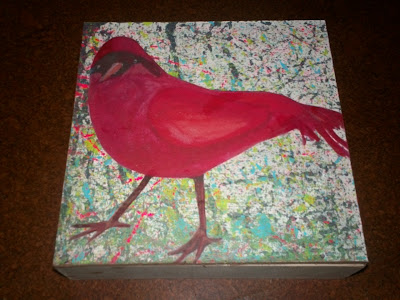 I got really got into the marble painting and wanted to make it into more. I even built a special cardboard box for rolling marbles on different size surfaces. I ended up making 5 of these pieces and I hope to have them showing in the next 100 Market Street show if I pass the jury. I built the frame/canvases like the ones I saw at fellow member, Jenn Ski's, house. I love when ideas have lives of their own and you wait for them to tell you the next steps and when they are finished. This little bird tells me he is not finished, he needs to be attached to his frame and get a few coats of matte varnish.
Posted by Jennifer Chamberlain at 8:45 AM 1 comment:

A sketch for IF "cultivate"

Been working on this week's Illustration Friday theme---cultivate. Here's the black and white version before I added watercolor. The finished piece is on my blog, "just pencil on paper."
Hope everyone is enjoying the first day of Spring! Too bad a little bit of snow is in the forecast here.

Posted by Jane Grant Tentas at 5:56 AM No comments:

A Day of Transformation

Cotting School in Lexington, MA invited me to speak on March 17 for their career day. I didn't remember to bring a camera, so I pulled the video above from their website so that you might get a sense of the school. Cotting services children with (as quoted on their website) "a broad spectrum of learning and communication disabilities, physical challenges and complex medical conditions." Established in 1893, and founded by two orthopedic surgeons from Children's Hospital, it was the first free, private day school for children with disabilities in America.

When I was asked to speak, I thought it would be in a classroom, but later I found out the event would take place in the auditorium. Eep! There would be over 100 people in the audience...an audience I wasn't quite sure how to interact with. And I would be observed by people who were experts at interacting with them.

My friend, Cotting's art teacher, once showed me assistive devices she created for students who were not able to hold a pencil or brush for example. Her students have produced remarkable works...works that so emanated love, I struggled to fight back tears during one occasion when I visited the school's annual art show.

So I began to prepare a presentation, on my work and illustration in general, not quite sure how to approach this. They were middle and high school students. Could I arouse their interest and encourage confidence in illustration as a viable career choice?

The day arrived and though I had spent countless hours preparing, nonetheless, I felt as if I wasn't ready. A nagging feeling surfaced that I would have to adapt as I went along. Much of my preparation may have to go out the window.

From my seat in the audience, I was able to observe three speakers that came before me as well as students, and staff. Some students, unable to use speech, had to type their questions and comments into assistive devices attached to their wheelchairs. Students with muscular control issues, had an added challenge. Teachers were at the ready to help if needed. Speakers stood quietly by until the question or comment was delivered. Success was consistent. Good will was palpable. Exchanges were thoughtful, insightful, and humorous. I was swept away by all of it.

After the three speakers finished there was a snack break. Wheelchairs zipped out of the auditorium and I had to watch my step. I was to speak next and somehow I knew everything would be so much more than ok.
Posted by Ann Marie DiVecchia at 12:17 AM No comments:

This weekend I went with a few friends to see the Edward Gorey exhibit at the Boston Anthenaeum and got inspired. My work is normally so cute and sickly sweet that I think its good for me to break out of my bubble and look at work that is not like mine at all - thus the melancholy and sarcastically witty world of Edward Gorey is just what I need. The exhibit is small, but packed with work throughout his career, from pencil sketches to final pieces, and I highly recommend it. It runs through June, so you have awhile to check it out. Here's a little something I did today, after getting this dose of inspiration! 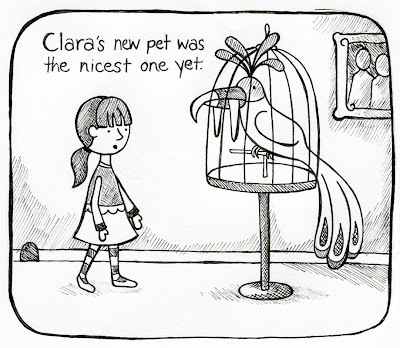 Posted by Vita Mechachonis at 7:00 AM 2 comments:

Oh she's so dead when I get a hold of her. Maddy seathed as she stood in front of everyone in her chicken suit.  It was one thing when Tanya pranked her at home, another when she did it in front of all of her friends AND their parents.  Sure, Tanya did say Maryann's Bah Mitzvah was a dress up party, but her jokester of a sister never stopped her when she obviously misunderstood "dress up party" to mean "costume party."  She was going to pay for this little joke. 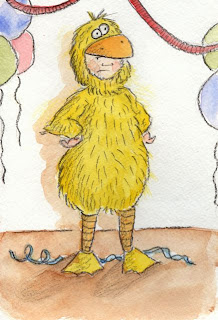 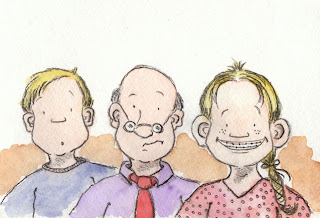 Posted by Michelle Henninger at 5:00 AM 3 comments: 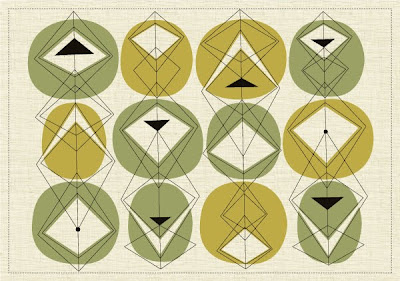 I'm attempting to get some placemats sewn and silk screened by a local company here in Bedford, NH. To get the price break, I need to get 500 made. I stuck a poll on my blog to see what color combo is most popular. The pink and green is on top, but the all green version is a very close second. If these do well I'd love to to different colors and designs.
Posted by Jenn Ski at 1:17 AM 2 comments: 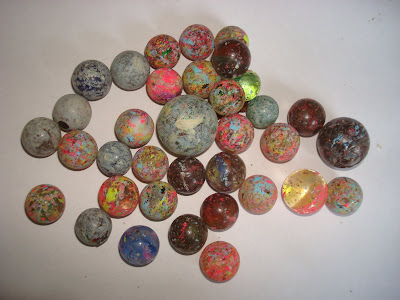 There was an unexpected snow day on Monday and after being winter vacation's sole entertainment committee member I was tapped out so I looked on a blog and was reminded of painting with marbles. The activity only lasted 12.5 minutes but these pictures will hang on our walls for a long time. To see more of the images that my daughter made (this was mine) go to foundmarbles.blogspot.com. The marbles look great after too! 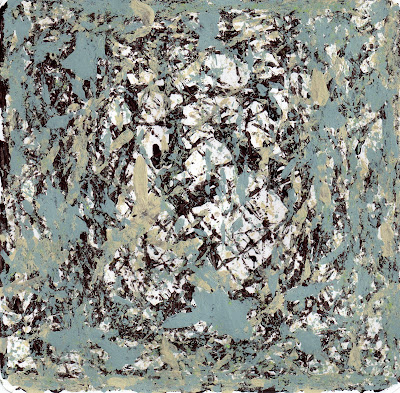 Posted by Jennifer Chamberlain at 10:24 AM 5 comments:

I may be overly optimistic, with piles of snow still outside my door, to post the Spring-themed header for Smells Like Crayons. Hopefully, we will see some green grass and dormant bulbs emerging from beneath the snow in the near future.
Posted by Jane Grant Tentas at 8:21 PM 2 comments: