It took a while to pick up the pencil.  Seeing that blank sketchbook and knowing where it's going to be going makes it a bit daunting.   Some artists have amazingly, tricked out sketchbooks.  Seriously, Faberge eggs of sketchbooks.  There was no way I was going to be able to compete with them, so mine remained blank.  But then I realized something.  That's not me.  I'm not a tricked out sketchbook girl.  I'm just me.  So, I picked up my sketchbook, and put down my sketches.   It's actually quite liberating once you begin.

Below is one of the sketches.  (You can see some of the others over at my site).   If you haven't considered doing it, I highly recommend it.  (And they have cool T-shirts too!) 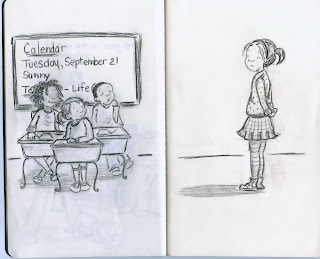 Posted by Michelle Henninger at 7:41 AM